Swiss Precision
Swiss made Elna sewing machines have the precision of a Swiss clock, and Elna has earned its reputation among sewing manufacturers since its beginning in 1940.

Sew with Fleece the EASY Way!

Don’t you just love fleece! It’s so soft and comfy. But, its softness and stretch sometimes make it a bit difficult to sew. Well, you can relax. This video course takes the mystery out of sewing with fleece and reveals the secrets of how to do it right. You’ll love the new projects that you make! Sign up now for this great fleece sewing video course.

Even though Elna hasn’t been around as long as some of the other sewing machine manufacturers, the company has stood up to the competition, and has produced high quality, high end Elna sewing machines, from its beginning.

Elna’s first sewing machine was the Elna #1, introduced in 1940. The Elna #1 was the first compact portable electric sewing machine, and it had a free arm that folded. Instead of the usual drab black, this model was green. 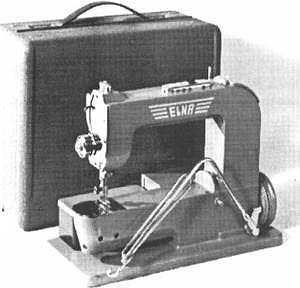 In 1952, Elna introduced its Elna Supermatic, which featured zigzag stitching and interchangable cams that allowed the sewer to produce different stitches.

Elna Lotus came into production in 1968 and it was another compact sewing machine.

Since then, Elna has continued to produce fine machines: basic mechanical models, high tech computerized models and models to do quilting or embroider.

Today you will find dozens of new Elna sewing machines, and many of them are characteristic of their fine Swiss roots, with precision features that are innovative.

However, like many sewing machine manufacturers, the company has also developed a line of cheaper machines, and you should be aware of this when shopping for a new sewing machine.

Make Bras that Fit and Support You!

Did you know that there are people whose profession is “fitting bras”? That’s because it’s such a difficult task to find a bra that fits you and feels good and looks good! How many bras do you have in your drawer right now that you bought and then abandoned, because they just didn’t fit? Well, you can fix that right now! This video course will show you how to measure, fit and make your own bras. And not just ugly ones that fit! Pretty lacy bras, sexy bras, cute ones and very personal ones. Don’t wear another mis-fitting bra again. Sign up now for this fantastic life-saving video course on how to make your own bras…


There may be links in the post above that are “affiliate links.” This means if you click on the link and purchase the item, I will receive an affiliate commission, which does not affect the price you pay for the product. Regardless, I only recommend products or services I would use personally and believe will add value to my readers.